This post is a part of series of posts showing Dependency Injection with Dagger 2 framework in Android. Today we’re going to take a look at Dagger Producers - an extension to Dagger 2 that implements asynchronous dependency injection in Java.

We all know that Dagger 2 is very well optimized framework for Dependency Injection. But even with all those micro-optimizations, still there are possible performance issues with injected dependencies - the “heavy” 3rd parties and/or our main-thread-blocking code.
Dependency injection is a process of delivering requested dependencies in the right place in the shortest possible time - and this is what Dagger 2 does very well. But DI is also about creating those dependencies. What is the point of delivering dependencies in nano seconds if we need to spend hundred of milliseconds creating them?

Maybe it’s not so important later, when our app has created serious bunch of singletons which are now served instantly by Dagger 2. But still we need a time window when we create them - and in the most cases it’s app launch time.

The problem (and hints how to debug it) was described wider in one of my previous blog posts: Dagger 2 - graph creation performance.

In very short, let’s imagine this case - your app has initial screen (SplashScreen) which does all needed things immediately after app launch:

Even if our code is very well optimized still there is a chance that some of external libraries need tens or hundreds of milliseconds to initialize. Before our launch screen will be presented all requested dependencies (and their dependencies) have to be initialized and delivered. It means that launch time is a sum of initialization times of each of them.

Example stack measured by AndroidDevMetrics can look like this: 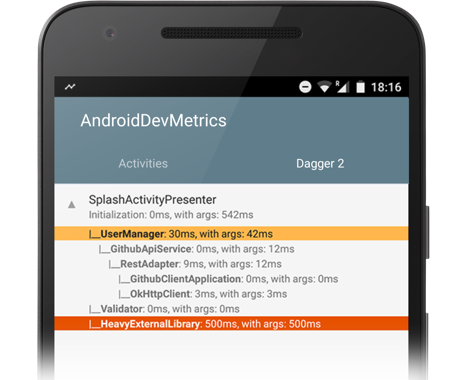 User will see SplashActivity in about 600ms (+ additional system work) - sum of all initialization times.

Dagger 2 has extension named Producers which more or less solve those problems for us.
The idea is simple - whole initialization process can be executed on background thread(s) and delivered later to app’s main thread.

Similar to Dagger synchronous injection we have a couple annotations which are used in injection process:

Same as @Module, this one is used to mark classes which deliver depedencies. Thanks to this, Dagger will know where to find requested dependencies.

Similar to @Provide this annotation is used to mark methods in @ProducerModule annotated class which return dependencies. @Produces annotated methods can return ListenableFuture<T> or object itself (which also will be initialized in given background thread).

Like @Component, it’s responsible for dependencies delivery. It’s a bridge between our code and @ProducerModule. The only difference from @Component is that we cannot decide about scope of dependencies. It means that each Produces method that contributes to the component will be called at most once per component instance, no matter how many times that binding is used as a dependency.

It means that each object served by @ProductionComponent will be a single instance (as long as we’re getting it from this particular component).

Producers documentation is pretty good so there is no sens to copy it here. Instead just take a look: Dagger 2 Producers docs.

The price of producers

Before we start implementation there are a couple things worth mentioning. Producers are a bit more complicated than Dagger 2 itself. It looks that mobile apps are not their main purpose of usage and it’s important to know a couple things about them:

Here you can find a good try with indirect solution for @Inject annotation.

If you still want to deal with Producers let’s update our GithubClient app to use them in injection process. Before and after implementation we’ll measure app launch time with AndroidDevMetrics and compare the results.

Here is the version of GithubClient app just before update with producers. And its measured average launch time looks like this: 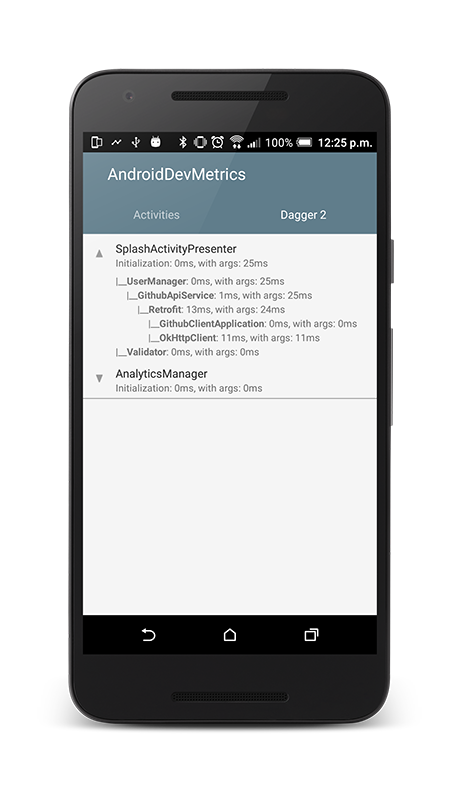 Our plan is to handle UserManager and its all dependencies with Producers.

We’ll give a try to Dagger v2.1 (but Producers are also available in current version 2.0).

Let’s add new version of Dagger to our project:

As you can see Producers are delivered as a new dependency, next to Dagger 2 library. Also it’s worth mentioning that Dagger v2.1 finally doesn’t require org.glassfish:javax.annotation:10.0-b28 dependency.

UserModule.Factory dependency was added only with app’s logic reasons.

Additional parameter is Executor instance which tells ProductionComponent where (in which thread) dependencies should be created. In our example we uses single-thread executor but of course it’s not a problem to increase level of parallelism and use multi-thread Executors.

As I said, currently there is no way to use @Inject annotation. Instead, we have to ask ProductionComponent directly (you can find this code in SplashActivityPresenter):

What is important here, object initialization starts when you call appProductionComponent.userManager() for the first time. After this UserManager object will be cached. It means that each binding has the same lifetime as its enclosing component instance.

And pretty much that’s all. Of course you should remember that userManager instance will be null before Future.onSuccess() will be called.

At the end let’s take a look how injection performance looks like right now: 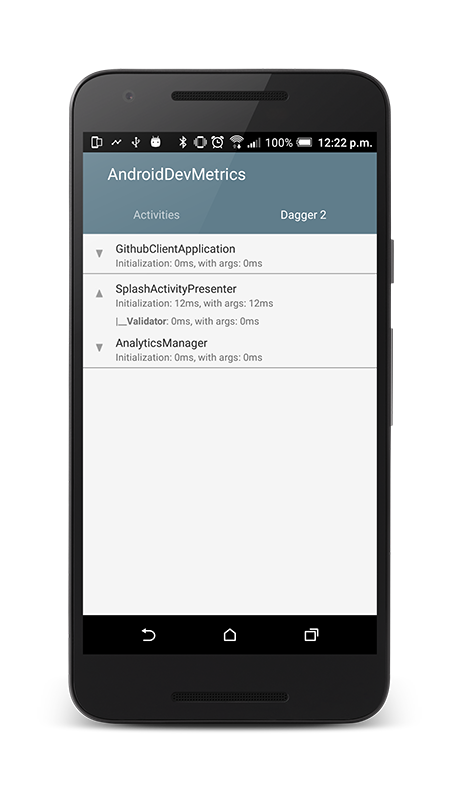 Yeah, that’s right - average value was about 15ms in this case. It’s still less than in synchronous injection (avg. 25ms) but not so little as you probably expected. It’s because Producers are not as lightweight as Dagger itself.

So now it’s your decision - if it’s worth to deal with Guava, Proguard and code complexity for those kind of optimizations.

Remember, if you feel that Producers are not a best fit for your app you can always try to wrap your injections with RxJava or another async code used in your app.