Scope - what does it give us?

Almost every project uses singletons - for API clients, database helpers, analytics managers etc. But since we don’t care about instantiation (because of Dependency Injection framework), we shouldn’t think about how to get these objects in our code. Instead of it @Inject annotation should provide us desirable instances.

Just to be clear - there are no @ActivityScope or/and @ApplicationScope annotations provided by default in Dagger 2. It’s just most common usage of custom scopes. Only @Singleton scope is available by default (provided by Java itself).

For a better understanding of scopes in Dagger 2 we go straight to the practical example. We’re going to implement something a bit more complex than Application/Activity scoping. For this we’ll use our GithubClient example from previous post. Our app should have three scopes:

Introduced @UserScope is the main difference between today’s solution and the one from the previous post. From user experience perspective it gives nothing, but from architectural point of view it helps us to provide User instance without passing it as an intent parameter. Also classes which required user data in methods parameters (RepositoriesManager in our case) can take User instance as a constructor parameter (which will be provided from dependencies graph) and can be initialized on demand instead of creating it in app’s launch time. It means that RepositoriesManager will be created after we take user from Github API (a while before RepositoriesListActivity is presented).

Here is a simple visualisation of scopes and components presented in our app. 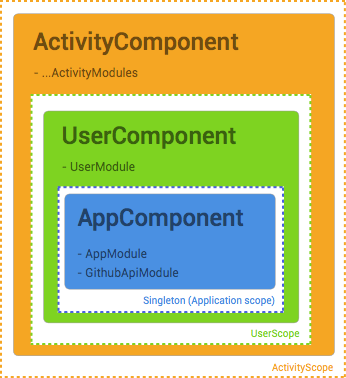 Here is an example lifecycle for scopes in our app:

In Dagger 2 scopes implementation comes down to a proper configuration of Components. In general we have two ways to do this - with @Subcomponent annotation or with Components dependencies. The main difference between them is an objects graph sharing. Subcomponents have access to entire objects graph from their parents while Component dependency gives access only to those which are exposed in Component interface.

I picked first way with @Subcomponent annotations. If you used Dagger 1 before it’s almost the same as creating a subgraphs from ObjectGraph. Moreover we’ll use similar naming convention for methods which create a subgraphs (but it’s not mandatory).

It will be root for other subcomponents: UserComponent and Activities components. As you probably noticed (especially if you saw AppComponent implementation from the previous post) all public methods which return objects from dependencies graph disappeared. Since we have subcomponents we don’t need to expose dependencies publicly - subgraphs have access to all of them anyway.

Instead of them we added two methods:

They mean that from our AppComponent we’ll be able to create two subcomponents: UserComponent and SplashActivityComponent. As they are subcomponents of AppComponent, both will have access to instances produced by AppModule and GithubApiModule.

Naming convention for this method is: returned type is a subcomponent class, method name is arbitrary, parameters are modules required in this subcomponent.

As you can see UserComponent needs another module (which is passed as a parameter of plus() method). Doing this we’re extending AppComponent graph by an additional objects produced by new module. UserComponent class looks like below:

Of course @UserScope annotation is created by us:

But what is important here - we’re responsible for UserComponent lifecycle. So we should care about initialization and release of it. In our app example I created two additional methods for this:

Scopes in Dagger 2 - under the hood

It’s always good to have a look under the hood how things work. Actually in this case to be sure that there is no magic in Dagger’s scopes mechanism.

We’ll start our investigation from UserModule.provideRepositoriesManager() method. It provides RepositoriesManager instance which should be scoped in @UserScope. Let’s check where this method is called (line 8):

UserModule_ProvideRepositoriesManagerFactory is used in UserComponentImpl - implementation of our component (line 15):

provideRepositoriesManagerProvider object is responsible for providing RepositoriesManager instance every time when we request for it. As we can see provider is implemented by ScopedProvider. Take a look at a part of its source code:

Could it be more simple? At the first call ScopedProvider takes instance from factory (UserModule_ProvideRepositoriesManagerFactory in our case) and stores this objet like Singleton pattern. And our scoped provider is just a field in UserComponentImpl so in short it means that ScopedProvider returns single instance as long as its Component exists.

Here you can find full implementation of ScopedProvider.

And that’s it. We’ve just figured out how scopes work under the hood in Dagger 2. And now we know that they are not connected with scopes annotations in any way. Custom annotations give us only a simple way to code validation in compile time and mark classes as single/non-single instances. All scoping stuff is connected to Component’s lifecycle.

And that’s all for today. I hope that scopes will become even simpler to use from now. Thanks for reading!