Async Injection in Dagger 2 with RxJava

A couple weeks ago I wrote a post about asynchronous dependency injection in Dagger 2 with Producers. Objects initialization execution on background thread(s) has one great advantage - it doesn’t block main thread which is responsible for drawing UI in real-time (60 frames per second for keeping smooth interface).

It’s worth pointing out, that slow initialization in not everyone’s issue. But even if you really care about it in your code there is always a chance that any external library does disc/network operations in constructor or any init() method. If you are not sure about it I suggest you to give a try AndroidDevMetrics - my performance metrics library for Android. It can tell you how much time was needed to show particular screens in app and (if you use Dagger 2) how much time was consumed to provide each object in you dependencies graph.

Unfortunately Producers are not designed for Android and have a couple flaws:

While we cannot do much with last two, the first one can compromise Producers in Android projects.

Fortunately a lot of Android devs use RxJava (and RxAndroid) for creating asynchronous code in our apps. Let’s try to use it in Dagger 2 asynchronous injection.

Here is our heavy object:

Let’s analyze it line by line:

Our Observable is injected like any other object in graph. But object heavyExternalLibrary itself will be available a bit later:

Code above presented how to inject singleton objects. What if we want to inject asynchronously new instances?

Make sure that our object is not @Singleton annotated anymore:

Here is the updated code:

There is another way to do asynchronous injection in Dagger 2 with RxJava. We can just simply wrap whole injection process with Observable.

Let’s say our injection is performed in this way (code is taken from GithubClient example project):

To make it asynchronous we just need to wrap setupActivityComponent() method with Observable:

As it’s explained, all @Inject annotated objects will be injected in some time in the future. In return injection process will be asynchronous and won’t have big impact on main thread.

Of course creating Observable objects and additional threads for subscribeOn() is not completely free - it will also take some time. It’s pretty similar to impact generated by Producers code. 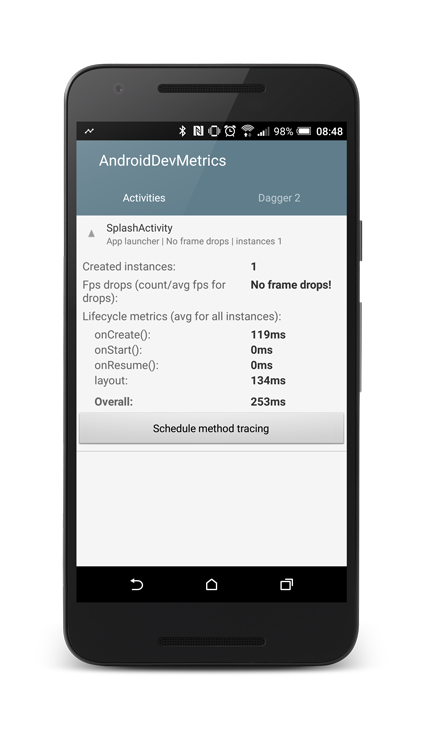