This post is a part of a series of posts showing Android implementation of INSTAGRAM with Material Design concept. Today we’ll create flow for photo capturing. This functionality is presented between the 38th and 41st second of the concept video. We’ll omit some details (like FAB button animation, colors, icons) because of a little more work with camera implementation. We’ll back to them in next (probably the last) post of series.

According to previous post, I have to mention that InstaMaterial application has been removed from Google Play Store because of violation of the intellectual property. I fully undertand this reason and in close future I’ll probably prepare version with different layout which is completely different from Instagram application (but still has all features presented in concept video).

Now let’s back to this post - here is the final effect which we want to achieve today:

Almost all solutions and animations described today were presented in previous posts. That’s why I won’t focus on detailed descriptions. But also there will be completely new element - camera. Those who have worked with it before know that this compoment is a little bit problematic for implementation. Why? In short - Android as an opened platform can handle very wide range of devices with completely different hardware (especially camera) specification. So if you are starting your work with picture capturing here is short list of things you should care:

According to some points described above, instead of writing my own implementation I decided to use external library for handling camera operations. I picked CWAC-Camera library which is also a little bit complicated for implementation but it takes care about a lot of edge cases. Even if author plans to completely rewrite it, in my opinion there isn’t any better start point to deal with photo/video capturing.

And the last thing before we start. Camera implemetation in InstaMaterial app is very limited. There is no logic for picture file handling and captured image displaying is very tricky. A lot of work should be done before this code will be ready for production (especially with bitmap cropping, picking right size for image etc.). But I trust that it could be good codebase for more complicated projects. 😄

As always let’s add some resources and less important boilerplate. Also some libraries have been updated. From now project has also new structure: 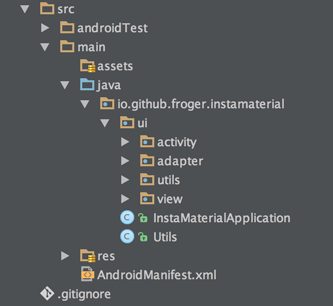 Don’t treat it as a final reference, but in real projects this is my favorite structure where ui/logic/data has separated trees (another option is to spearate trees by functionality but in smaller projects it can be redundant).

Camera library installation is very simple. All we have to do is add new maven repository in <project>/build.gradle file:

and new dependency in <project>/app/build.gradle:

Finally we have to add new permissions in AndroidManifest.xml file:

Now we can start implementation of capture screen. I considered two ways of implementation - two different activities for taking photo and editing it or one activity with these states. First option is more correct in my opinion (and probably I would use it in production code) but finally I took second one. Why? Because there is no simple way (but it isn’t impossible!) to make transition from camera preview to taken photo preview without little layout hickup. By default camera saves taken picture on external storage and another activity should read it from that place. Unfortunately it generates a little delay so we would have to figure out some solution for passing bitmap between two activities (something more complex than sending bitmap via Intent’s bundle or saving bitmap as a static field).

Let’s start from intro animation. For Activity transition we can use RevealBackgroundView introduced in one of the previous posts. One more time we have to pass starting location (taken from FAB button this time). The only difference is that we have to add new style which hides status bar in TakePhotoActivity:

and set it in AndroidManifest file:

Commit with all described changes is available here.

Now let’s prepare layout for capture screen. As I mentioned it should handle two states - capturing and configuring photo. That’s why we should implement elements transitions. For this we’ll use ViewSwitcher which can handle animation between his children (in our project we used TextSwitcher for likes counter animation which extends ViewSwitcher class).

Before we start layout implementation we should prepare background for capture button:

First one can be created in .xml file. We can use layer-list with two circles and circular stroke on top of them:

Second one is even simpler - it’s only simple circular stroke (inside images are provide in project’s resources).

Remember that both of them don’t handle onClick and enable/disable states. You can do it on your own. 😄

Now we have all required elements for TakePhotoActivity layout. Implementation is simple but a little bit complex. That’s why I don’t show source code. Instead of this here is the visualisation of its layout: 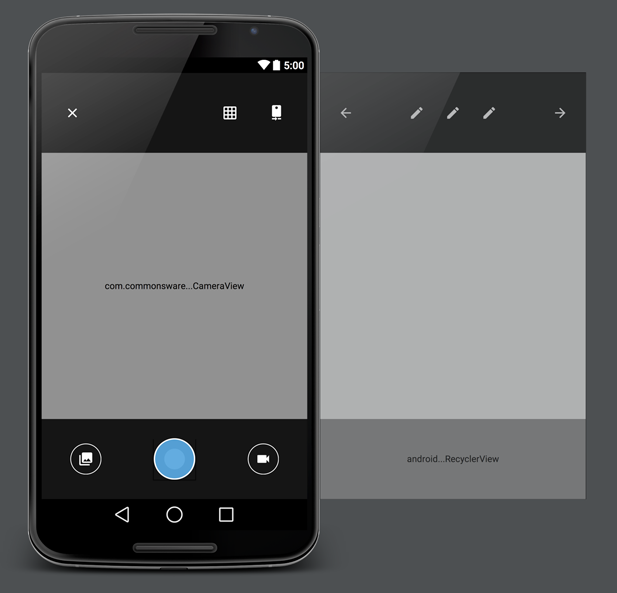 Top and bottom panels slide from the right side of screen (thanks to ViewSwitcher parent). Taken image (white square on the right) appears on top of CameraView when photo is taken.

Here is the full source code of .xml file.

Finally we can implement the most important thing - photo capturing. In short here is the list of requirements:

Now we have to configure CameraView. According to CWAC-Camera documentation we have to integrate this view with Activity lifecycle (onResume() and onPause() mehtods):

If we use CameraView in our layout (instead of using CameraFragment) our Activity must implement CameraHostProvider interface. It provides getCameraHost() method which should return CameraHost implementation. This interface is resposible for our camera configuration. For our needs we create very simple MyCameraHost inner class:

In short it takes care about putting the same size to preview and captured image (thanks to that taken image won’t be stretched in compare to preview). useFullBleedPreview() means almost the same as centerCrop scale type in ImageView. So if CameraView preview has different size than view layout params (in our example it has!) preview will be cropped and fill whole available area.
saveImage() method is called at the end of capture operation (so even if we modify given bitmap it won’t affect on file saved on phone memory). But keep in mind that saveImage() method will be called only when we call takePicture() with proper parameters.

I won’t deep into rest of CameraHost implementation. Just check the CWAC-Camera documentation for more informations.

Of course if we want to see shutter effect we have to implement it on our own. Here is how it looks in our project:

Here is the full source code of TakePhotoActivity.

And that’s all for today. Thank you all for the reading! 😄