Some time ago I published unofficial Google Actions SDK written in Java. Source code and documentation can be found on Github: Google-Actions-Java-SDK. Library can be also downloaded from Bintray jCenter:

The goal for this project is to give Android/Java developers possibility to build solutions for Google Home without learning new language (official Actions SDK is written in Node.js).

In this post we’ll go through Google Assistant agent implementation. We’ll build simple Github client which will tell us what is the one of the hottest repositories from last days.

Our Github Actions agent will be built in Java and hosted on App Engine.
At the beginning we need to create new project in Google Cloud Platform dashboard.
When it’s done remember your project ID, it will be needed during configuration. In example described in this post id is: *githubactions*.

Then we need to install CLIs for Google Cloud and Google Actions:

This config file defines our agent’s Actions. It’s mostly self-describing but in case you would like to know better what is happening here, please visit official documentation.

Now let’s update it with our configuration. We would like to have an agent which is able to handle two actions/intents:

Now let’s build service to handle requests from Google Assistant. We will build simple REST server, which handles POST requests (based on configuration above, both intent requests will be sent to https://githubactions.appspot.com/).

Our app requires a couple dependencies defined in app/build.gradle file:

Final gradle files (able to build, run and deploy our GAE code) can be found here:

All dependencies for Assistant Actions can be found in AssistantModule class.

Final servlet code should be similar to this:

Line 15 is the place where all magic happens:

1) POST request comes from Google Assistant. It is parsed to RootRequest object (lines: 18–20) and passed to assistantActions.

4) Response is passed to AppEngineResponseHandler which sends it back to Google Assistant.

At the end you need to add App Engine servlet configuration to your project (files: web.xml and appengine-web.xml):

Now our app is ready to deploy. If the configuration is correct, all you have to do is: 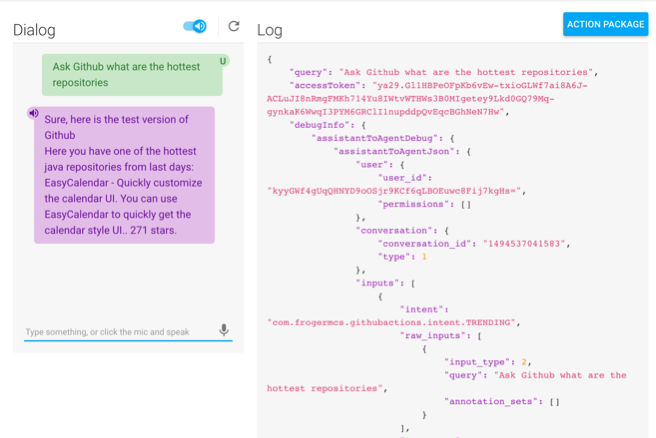 Even if you don’t have Google Home device, it’s still possible to simulate you newly created Assistant Actions. To do this you can use Google Home Web Simulator. All you need to do is:

More details can be found in official guide.

And that’s all! We’ve just built our very first preview version of Actions for Google Assistant. In future publications we’ll see how to extend its functionality.

Final source code of described project can be found on Github.