Voice interfaces are definitely the future of interaction between people and the technology. Even if they won’t replace mobile apps (at least in next years), for sure they extend their possibilities. It means that for many mobile programmers, assistants like Actions on Google or Amazon Alexa will be next platforms to build their solutions.

Currently if we want to build app for Google Home or Google Assistant we have to use Node.js library. But under the hood, Assistant Platform uses JSON-formatted HTTP requests as a communication standard. It means that it’s relatively easy to build SDK in any other language.

And so I started building unofficial Google Actions Java SDK. If you are like me — an old-fashioned Android developer who builds in Java, there is a big chance that you have a lot of great code powering your apps which can be reused in Assistant Actions. And this was the main reason for this SDK — to enable as much developers as possible to write code for Assistant Platform.

Since Google Actions Java SDK is on the proof-of-concept stage and still there is a lot of work to do (including documentation and tests), working implementation is all about:

The rest are just better code architecture/scalability and utils (e.g. ResponseBuilder and all others not yet written).

As a working example we have simple AppEngine app written in Java which can be used as a replacement for Node.js server, and be easily deployed on Google Cloud. I won’t describe Servlet deployment process - it’s just a mix of these tutorials:

From code perspective here is the whole flow:

3) Ask response is generated and passed to ResponseHandler which sends response to Assistant.

4) 1–3 steps are repeated for next utterance which then is echoed to user.

Here you can see output from Web Simulator which additionally can shows the whole debug output for communication between Assistant and our Servlet. 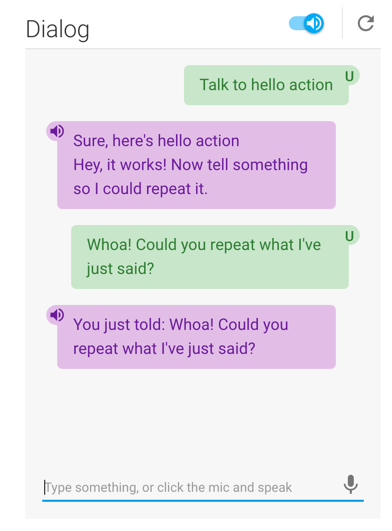 Presented example is very simple yet powerful. If you already have any rest client implemented in your Android app (e.g. Github API client) you can put this code to our example Servlet and give user possibility to access this informations via voice interface. As mentioned at the beginning — all you have to do is proper handling for RootResponse and RootRequest.

At the end I highly encourage you to contribute in Google Actions Java SDK development. Let’s enable as many developers as possible to build their brilliant ideas for Google Assistant and Home!