We live in times where apps have to be not only useful but also smooth and delightful. Times slightly different than a couple years ago where all we had to do was just notifyDataSetChanged() on ListView adapter. Screen just blinked, new data appeared and that’s all.
Today, in a times of RenderThread, MaterialDesign animations and transitions app should show exactly what’s happening. User should see when data from his collection just changed or when something new appeared or/and was removed.

By the way if you missed it, I highly recommend to watch whole playlist - there are a lot of great sessions about Android development, tools and solutions.

One of those videos - RecyclerView Animations and Behind the Scenes is the reason of this post. Chet Haase and Yigit Boyar walked through animating items in RecyclerView and showed how to do it right. This can be good starting point how to make our RecyclerView more interactive and delightful.

While those are only basics, presented solutions can help you with cleaning up your huge RecyclerView.Adapter and solve most common issues.

InstaMaterial source code which we want to cleanup is available under this commit (most recent head version is already updated with changes described below).

Also what is important - from a user perspective we’ll change nothing in current app. But from the code we’ll try do things right (or at least as clean as it’s possible in example app).

Code which we want to rebuild is responsible for two similar actions:

Those animations should be triggered in our RecyclerView

Previously our animations were implemented directly in FeedAdapter, the RecyclerView.Adapter subclass. Everything worked, so what was wrong with this approach?

Let’s take a look at our FeedAdapter one more time.

Those lines of codes shouldn’t be here:

We need to have control on when we should animate items and not (items should be animated on first appearance, but not when view is restored in activity restoring process).

We should keep our animations somewhere, in case we need to check if they are playing or to cancel them in recycling process.

Here we run enter animation every time when view is bound and check if it’s right moment to do this (items should be animated once). Probably method name is bit confusing for described case.

In a moment of binding view in onBindViewHolder() we’re cancelling animations if they are already running. This is because view can be recycled and we don’t know if there is any not finished animation.

Methods updateLikesCounter() and updateHeartButton() are responsible for setting content in both ways (animated and static).

Also there is an issue in our code.

We’re passing position to our buttons:

To have it later in our onClick() method:

This position index not always will be correct. Especially when we use this position in both approaches: for placing context menu in a right place on a screen and for passing adapter item to it (well, theoretically in this case 😉).

Since RecyclerView can update data in an async way (item views can be moved without updating data - for example with notifyItemMoved()) there is a possibility that our position indicates wrong data.

This is very similar to case which Yigit Boyar talked about: 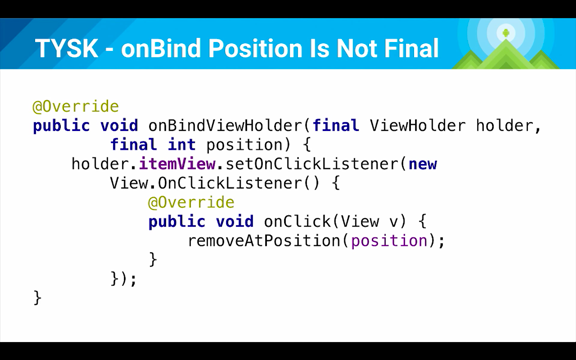 We cannot assume that item position will be final (and code on this slide can cause issues).

Instead we should use those two methods from RecyclerView.ViewHolder:

Let’s start from beginning. Our Feed will be built with those pieces:

Here is the full code of FeedItemAnimator.

And here we have more interesting code from it:

When we’re calling notifyItemChanged() method we can pass additional parameters which will help us to decide what animation should be performed.

Method recordPreLayoutInformation() is used for catching data before it was changed. Then RecyclerView calls onBindViewHolder() (in adapter) and at the end ItemAnimator calls recordPostLayoutInformation() which catches data after this.

Thanks to those operations we can have informations about item state before and after its change.

At the end of everything method animateChange() is called, with both pre and post ItemHolderInfo objects. Here is how it looks in our example:

And the second thing - appear animation. It should be triggered when we see our list for the first time. And this is how it’s handled:

It’s good to implement those two methods. Thanks do this RecyclerView will be able stop animations on item view, when it will disappear from a screen (and will be ready to recycle).

Also those two used methods are worth mentioning:

And that’s all. Our updated FeedAdapter has 200 lines of code less than before and is responsible only for data-view binding. Here is the full source code of it.

Most recent version of InstaMaterial source code is available on Github repository.