A couple months ago, after Google presented Material Design - new design guidelines for mobile and web both, designer Emmanuel Pacamalan created concept video showing what Instagram for Android would look like after aplying Material Design rules:

While it’s only graphic prototype some people started to wonder if it’s possible to implement this in real application in relatively simple way. Well, it is. And not only on devices with the latest Android OS - Lillipop. The truth is that we can achieve most of showed graphics and animations effects for a couple years, since Android 4 was released.

Regarding to this I want to start new series of posts in which I’ll show you how to reproduce INSTAGRAM with Material Design on real Android devices. Of course, for obvious reasons we’ll create only front-end mockup for this application, but we’ll try to reproduce as many details as it’s possible.

In this post I’d like to reproduce first 7 seconds of showed concept. I think it’s enought for the first time, regarding to that we also have to prepare and configure our project.

I’d like you to remember that all solutions which I’ll show you are not the only possible ways - they are my favorite ones. Also I’m not a graphic designer so all images used in our project are taken from public resources (mainly from Material Design avaiable on it’s resources page).

Ok, here you have screenshots and two short movies (taken on Android 4 and 5) showing our final effects: 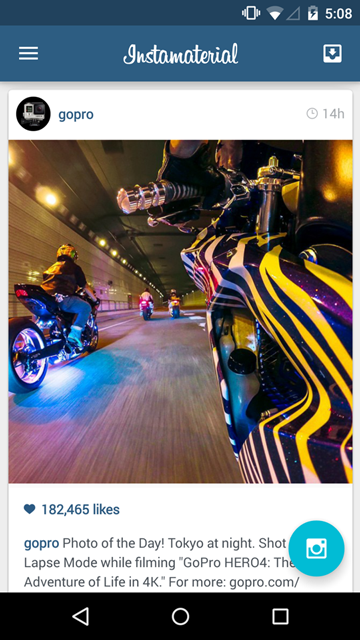 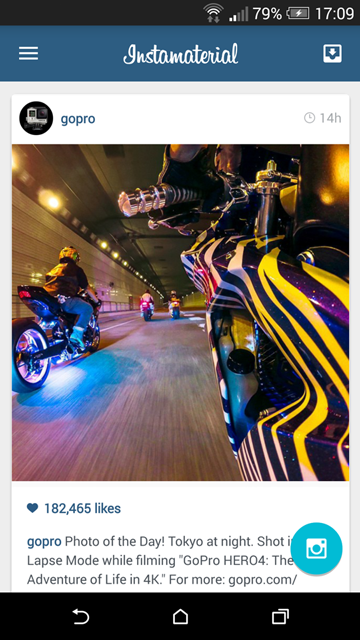 In our project we’ll use some popular tools and libraries used for Android development. Not all of them we’ll use in this post, but I’d like to prepare project as much as it’s possible to avoid dealing with build files in close future.

First of all we have to create a new Android project. For this I used Android Studio and gradle build system. Minimal version of Android SDK is 15 (Android 4.0.4).

After that I’ll add some dependencies and utils. There is nothing special to talk about so here you have full source code of build.gradle and app/build.gradle files:

In short, what we have here:

In this project I used a couple of icons from Material Design resources. Also I made screenshots of GoPro profile on Instagram to provide mockups of our feed. App icon is taken from INSTAGRAM with Material Design video. Here is complete bunch of images used in project (whole drawable-xxdpi directory for now).

Let’s start from defining default style for our app. The simplest way for providing base of Material Desing styles for both Android 4 and 5 is to inherit from Theme.AppCompat.NoActionBar or Theme.AppCompat.Light.NoActionBar. Why NoActionBar? Becase new SDK (and compatibility library) provide us a new way for implementing ActionBar pattern. In our example we’ll use Toolbar widget because of simple reason - it’s better and more flexible solution then ActionBar. I won’t dig into the details. Instead you can read it on Android Developers Blog in one of the latest posts about AppCompat v21.

Basing on concept movie we’ll define three base colors for our AppTheme:

More details about what these colors are, you can find in Material Theme Color Palette documentation.

Our current project will be build from 3 main layout elements:

Before we’ll start to implement our layout, let’s define some default values in res/values/dimens.xml:

These dimensionas are based on values introduced by Material Design guildelines.

Great, now we can implement layout for our MainActivity:

Some explanation about code above:

To simplify our work on FAB we’ll use a little different styles for Android Lollipop and pre-21 devices:

Also we have to add two colors to our res/values/colors.xml file:

As you can see making shadow effect for pre-21 device is a little tricky. Unfortunatelly there is no simple way to achieve “real” shadow via XML file. Other options are to use prepared earlier shadow image or do it by using Outline class directly in Java code (hint for creating fab shadow).

Now let’s finish our Toolbar. We have background and application logo so right now only navigation and menu icons are missing.

For menu icons we can use standard Options menu defined via res/menu/menu_main.xml:

And inflated from Activity source code:

Now everything should works but as I mentioned on twitter, there is some inconsitency in Toolbar onClick selectors:

To fix this we have to do a little more work. First of all let’s create custom view for our menu item (res/layout/menu_item_view.xml):

Now we have to create onClick selectors, for Android Lollipop (with ripple effect) and Android pre-21:

Last thing we should do is to put our custom view into menu item. We can do this in onCreateOptionsMenu() method:

And that’s all. Our Toolbar is ready. Also onClick selector for menu item works as it should:

Last thing we should implement is feed, built on RecyclerView. Right now we have to setup two things: layout manager (RecyclerView has to know how to arrange items) and adapter (to provide items).

First thing is straightforward - while our layout is simple ListView we can use LinearLayoutManager for items arragement. For the second one we have to do more work, buth there is no magic to deal with.

What we’ve got there:

Nothing special to talk about.

To put everything together in our MainActivity class we have add this method:

And that’s all for now. Here is full source code of MainActivity class:

In case you missed something here you have commit for whole project which we have in this moment.

When you build and run app on your device you should see these screens:

The last and the most important things to implement are intro animations. Take a look at concept video again and let’s list all animations performed on main Activity’s start. In my opinion we can split it for two steps:

Toolbar items animations are performed one after another in short period of time. The main problem with implementation of this animation is navigation icon - the only element which we cannot animate. The rest is pretty straightforward.

First of all we want to animate our application only when we start it (not after i.e. we’ll rotate our device). Also keep in mind that we are animating menu item which isn’t available in onCreate() method (we are initializig it in onCreateOptionsMenu()).

Thanks that startIntroAnimation() will be invoked once, after we start our application.

Now it’s time to prepare animation for Toolbar and its inner items. It’s also pretty strighforward. It’s good to keep in mind that, in general, animations are composed from two steps:

Ok then, let’s try to implement both steps for Toolbar animation:

What we’ve got here:

In this step we want to animate two things: FAB and feed. While FAB animation is pretty simple (just do the similar actions like described above), animating feed items is a little tricky.

For this example the simples solution is to keep feed adapter empty and fill it in the moment when we want to animate items. And animate them directly in adapter, while items are created. How it looks like in real code? Take a look:

And… that’s all! If we build and run our project we have the final version showed at the beginning of this post.

In case you missed something, here is commit for our project with implemented animations.